DataWild® is linked to the Barcode of Wildlife Project (BWP) and the ArK Project to assist with law enforcement within African countries.

Illegal wildlife trade is estimated to be a $20 billion a year industry, ranking alongside illegal trafficking in drugs, weapons and people as the largest transnational crime enterprises.

More than 35,000 of the world’s 1.8 million named species are in danger of regional or global extinction and their trade is regulated by an international treaty and national laws. Intercepting wildlife as they are transferred across borders is critical to slowing illegal trade, but current detection tools are inefficient, expensive, and unreliable.

The Barcode of Wildlife Project (BWP) has three overall goals :

1 – Demonstrate the utility and effectiveness of DNA barcoding in the investigation and prosecution of wildlife crime;

2 – Construct a public DNA barcode reference library of 50,000 voucher specimens representing 10,000 species, 2,000 of which will represent endangered species selected by the six partner countries. The remaining 8,000 will be closely-related or look-alike species; and

3 – Assist the partner countries in formally adopting and implementing DNA barcoding as a sustainable tool for law enforcement.

South Africa is the 3rd richest country in the world in terms of biological diversity. It is home to about 10% of the world’s plants, 7% of the reptiles, birds and mammals, and 15% of known coastal marine species.

This web of natural life is vital for human well-being. It provides water, food, eco-tourism, fisheries, medicine, energy, and oxygen. We need to take care of our natural wealth.

Identification of trace evidence through DNA Barcoding can assist wildlife crime case by proving an offense has taken place, identifying an offender, linking an offender to both crime scene and items removed from a crime scene with that scene all form a critical part in compiling a case. 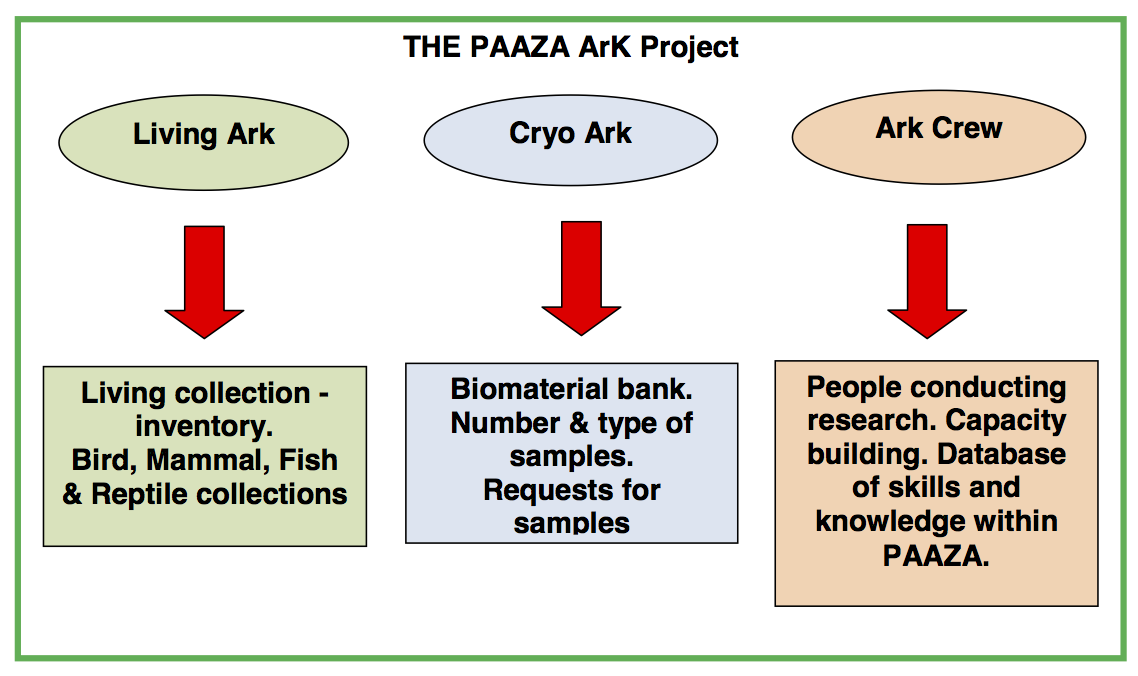 A target to relieve the pressure on global biodiversity is to prevent the extinction of species. The International Union for Conservation of Nature (IUCN) and the CBD (Article 9) recognized the need for combining in situ conservation actions with ex situ approaches. PAAZA should therefore be a recognized role player and show impact in the policies of governments, conservation organizations and research institutions. This was supported by an incredible offering by ZIMS/ISIS of their software to PAAZA facilities.

Below figures indicate the number of PAAZA biomaterials banked by the participating PAAZA institutions circa 2011 and 2017. 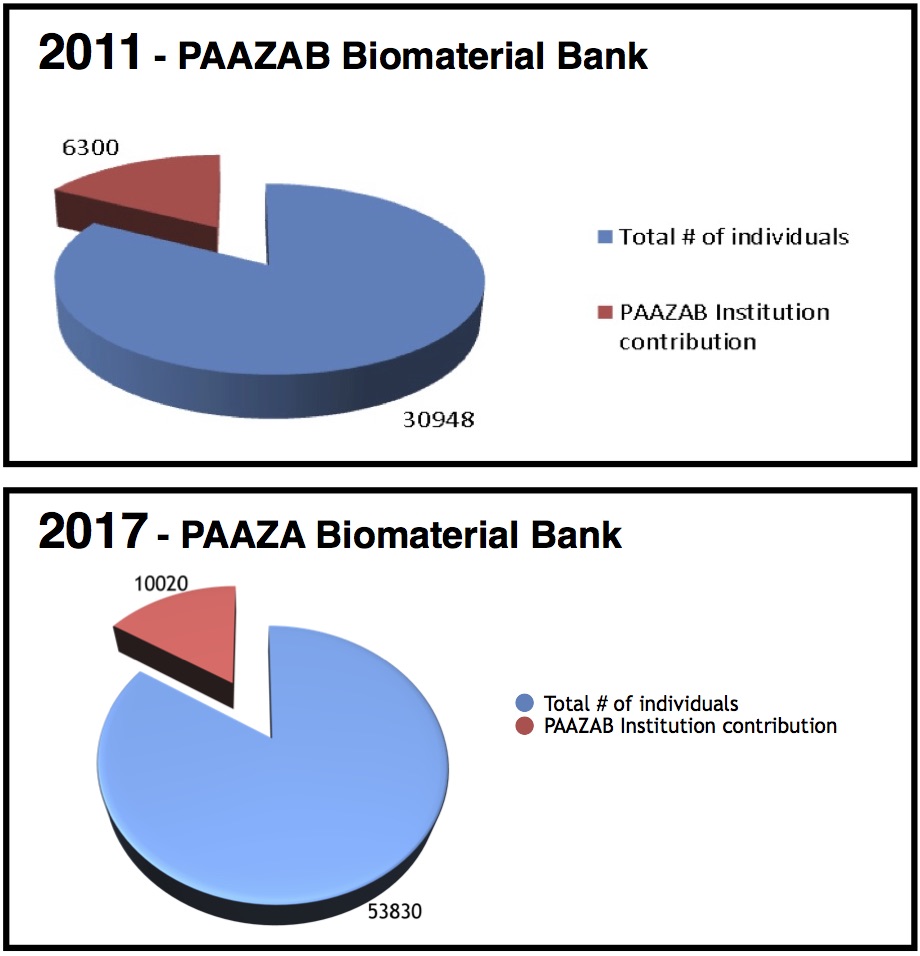 Capacity building included the Fourth African Symposium on Zoological Medicine in 2015 (bi-annual). The programme included a full day of practical’s on the first day with the next two days focused on a variety of taxa both terrestrial and marine. In a first, the symposium was open to animal keepers to offer a cross learning opportunity.

We would like to highlight some key research projects where PAAZA institutions are either leading the research or are significant collaborators. A summary of some of these APP projects follows.
Sungazer (Smaug giganteus), Ground-hornbill (Bucorvus leadbeateri), Cheetah, Pickersgill’s Reed frog, Amphibian Chytrid Fungus (Batrachochytrium dendrobatidis), African Penguin (Spheniscus demersus), Turtles, Sharks.

Some of the academic institutions linked to these research projects include, but are not limited to: TUT, WITS, UP, UFS, TUT, NWU, UCT, NMMU. In addition to this is a linkage to national departments: DEA, Oceans & Coasts, SanParks and also wildlife agencies: Zimbabwe Museum, Kenyan Wildlife Services, Uganda Wildlife Centre, Bristol Zoo, Provincial agencies.

One of the most important developments is the commitment to collaboration between The National Zoo (NZG)/National Research Foundation (NRF) and PAAZA for the DNA typing and Bio-banking of samples. Together we will be developing protocols and tools in line with Legislative requirements.

This has all culminated in every animal being issued a unique ‘Passport’ which links it through the Studbook to the DNA databank and vice-versa: 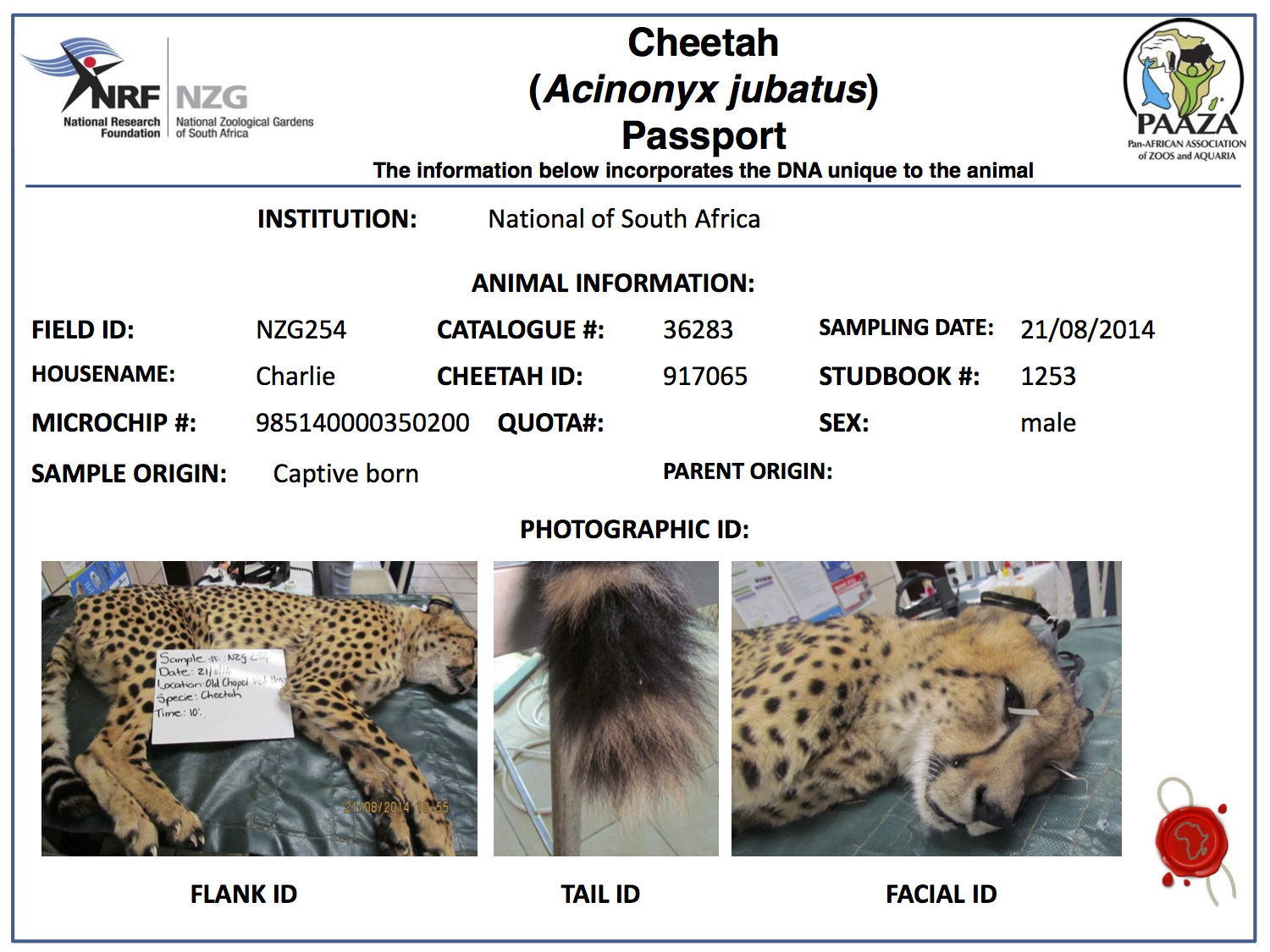 Enter a scientific name or a common name